On Sunday Lucia and Nan and I took Amtrak down to Salem to stay with my aunt Gretchen and see the total eclipse. Nan had reserved train tickets months before in preparation, but at the last minute I resisted going because I was two days away from finishing The SweatBox upgrades and I felt stressed about managing the final stages remotely. I rationalized that the eclipse in Seattle would be at 92% of totality and that seemed good enough.

But Lucia and Nan convinced me that seeing a total solar eclipse was a once in a lifetime opportunity and I could manage The SweatBox from afar. We'd avoid traffic because we'd be on the train. We had a place to sleep, a place to watch the eclipse, and my favorite aunt waiting for us with eclipse glasses. Nancy even looked up a couple of eclipse rituals: One, to put water in jars and expose it to the two minutes of totality, and save it for times when we might need some extra energy or support.  A second idea we all did was to treat the eclipse like a time of renewal. The idea was to set intentions for what we wanted to let go of or release from our lives as well as things we hoped to manifest. For me, one of the things I struggle to release is control, especially while traveling. I included this in my eclipse renewal list.

Our trip down on the train was uneventful. We played four hours of gin rummy, hearts, and solitaire in the club car and ate a steady stream of alternating salty and sweet snacks. 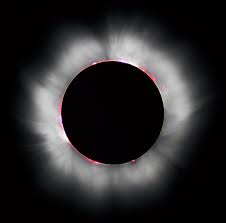 The next morning we filled our eclipse water bottles and set up to watch the eclipse in a huge open field behind Auntie Gretchen's house. It was just us and one other family in a vast stretch of prairie. We started seeing the moon cross over the sun at a little after 9am and the events that followed were nothing short of miraculous.  Perhaps more than seeing the moon pass in front of the sun, what affected me most were the shifts in our immediate environment. When we started watching the sun through our eclipse glasses, the air was hot and the sky was bright. As soon as the moon covered about 70 percent of the sun, we noticed the light around us starting to change. It got chilly and, as the eclipse reached totality, it got REALLY cold and the light turned eerie, like we were on a movie set with no natural light. And the animals started to react. Lucia said she heard owls. We saw three bats racing overhead. Birds of all kinds chirped maniacially. Dogs barked at random. And then, just was quickly, the world came back to normal. The temperature started rising, the light got warmer. We shifted back to regular life, but I felt kind of funny--tired, weak, borderline nauseous.

I told Nancy that I felt like I'd had a physiological shift from the eclipse. I'm inclined towards high woo woo and Nancy is a die hard pragmatist. "Laura," she said, "you had a lot of coffee and there was a lot of build up to the eclipse. Maybe that's what you're feeling."  But I felt like it was something more. I'm not a physicist and I don't understand much about the earth's magnetic pull, but if felt related to that, like my own equilibrium was off, something had shifted.

A few hours later it was time to get back on the train and make our way north to Seattle. As predicted, the train depot was mobbed and our northbound train was late. True to my anxious nature, I was managing an imminent panic response. There were so many people. I was sure if we got seats at all,  they'd be crappy seats; surely we wouldn't be able to sit together.  We waited in the massive line to board the train and got assigned three seats, two together and one directly across the aisle that looked occupied. I circled back to talk to the conductor, a petite raspy-voiced woman in her late fifties (I soon learned her name was Maureen). "My seat looks occupied by an employee," I told her. "Aw, don't worry about that, just push my stuff over" she croaked.

So Nancy and Lu sat on one side and I sat next to Maureen's pig pen.  Somehow I became Maureen's assistant. As the train pulled out of the Salem station, Maureen handed me a dirty piece of paper with wrinkled tape with the wifi password. "Anyone who needs help wi